While chugging away at my suffolk/dorset roving, I was thinking of the many plant dyed kilos of ditto upstairs, which has to be fluffed and handpicked to loosen most of the tiny plant particles embedded, before it can be carded into batts/rolags. And decided I needed help with that. If you don’t make that effort, the VM just stays in there or on the drumcarder, forever polluting the next fibers and the next.

I’m not sure I’ll process fleeces again, the rational thing for me to keep my hobbies but save my “spoons” would be doing some artistic spinning, not production. So I’ve made a crude, quick and cheap device that I’m hoping works ok for small batches. I had the box already and made it so that can be used again later should I wish it, the other parts were found in the garage apart from the nails which are new and shiny. I haven’t gotten special ones or even sharpened them, as I said, crude. Besides, our local hardware store shut down, so supplies now require extra effort, planning and driving. 🙁

It’s taken me a week to make it; although I’ve predrilled the holes I can only hammer in one row of nails at a time before my hand hurts. A handicapped DIY girl’s best friend: Drill press!! A week you say – didn’t I mention this months ago? Yes. And I was stopped by a tiny detail of old, brittle wood splintering. And I lost my steam, the garage being so cold. But NOW! My plan to simply enlarge the holes before hammering in nails worked, it just took me some time to actually try it. 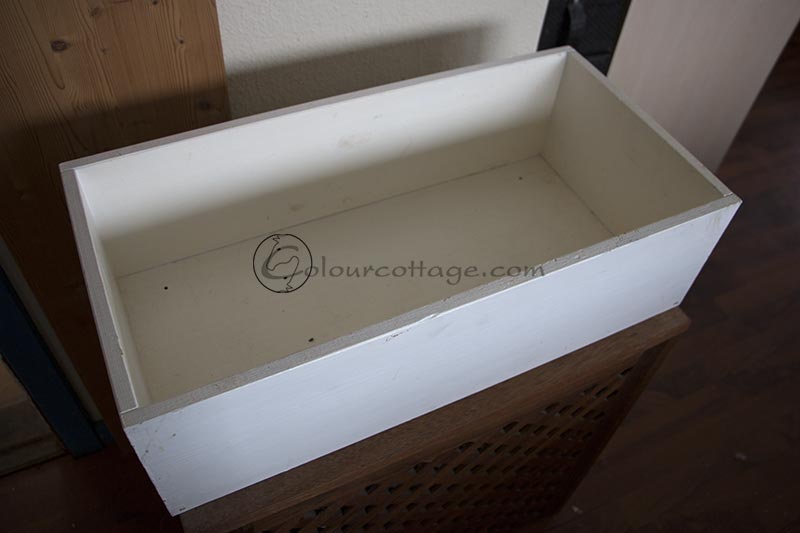 Some netting and sticks – this will hopefully let the crud gather at the bottom without mixing with the wool again. 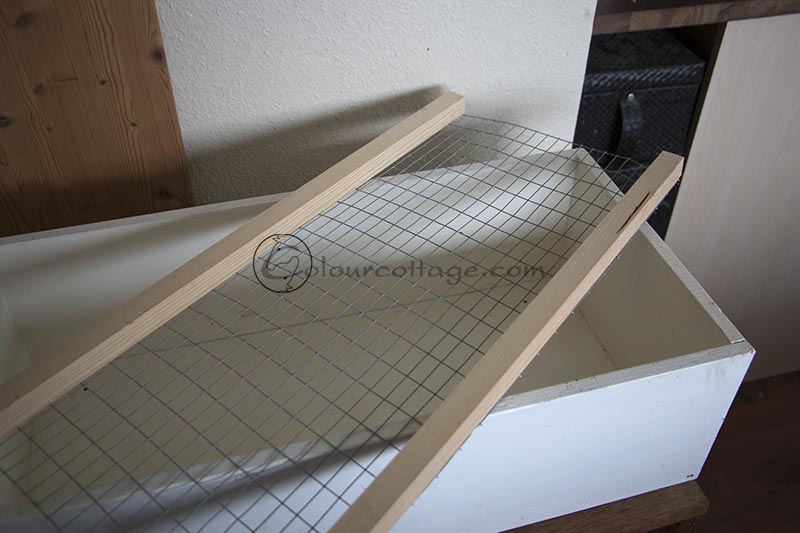 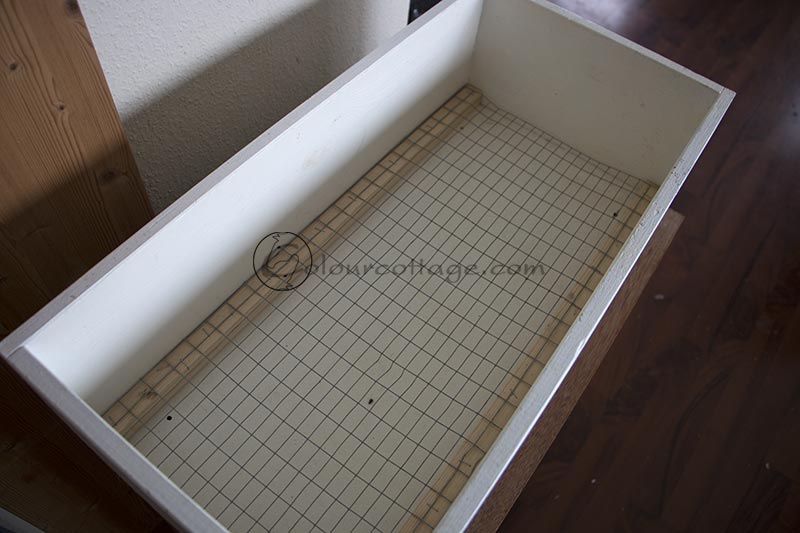 Scrap wood and nails – the outer ones are supposed to bend backwards and forwards respectively, but I haven’t mastered that yet. 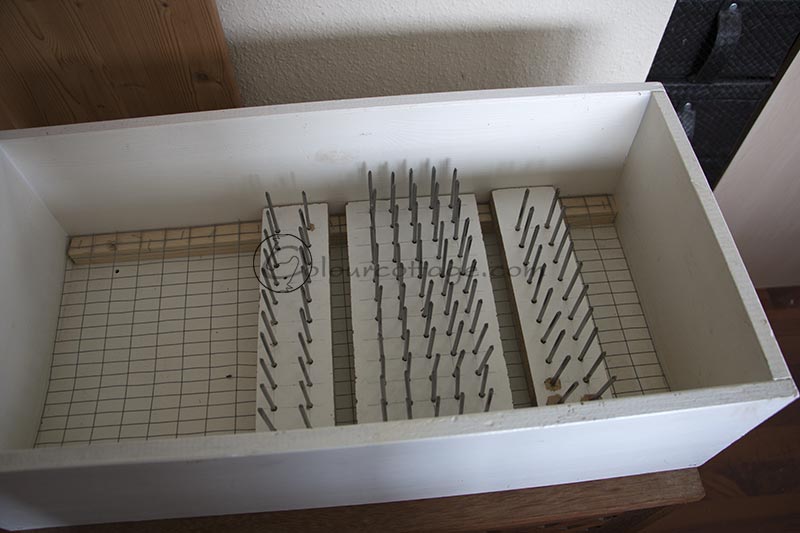 And yes, you need to bolt them down. But only to the netting part, so it all comes out. 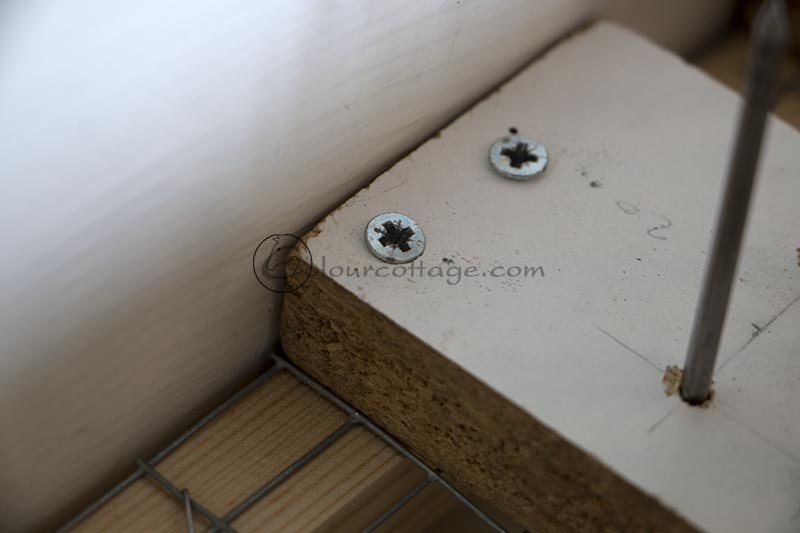 The lid is where the action is, with guides to keep it sliding on a track. 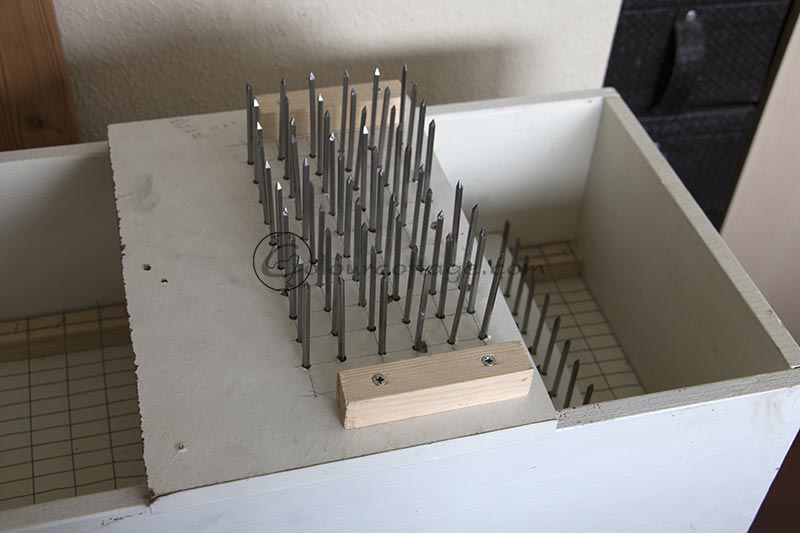 Lid needs to go over the edge, hence the short gliders. In fact, an even longer box would have been preferable. 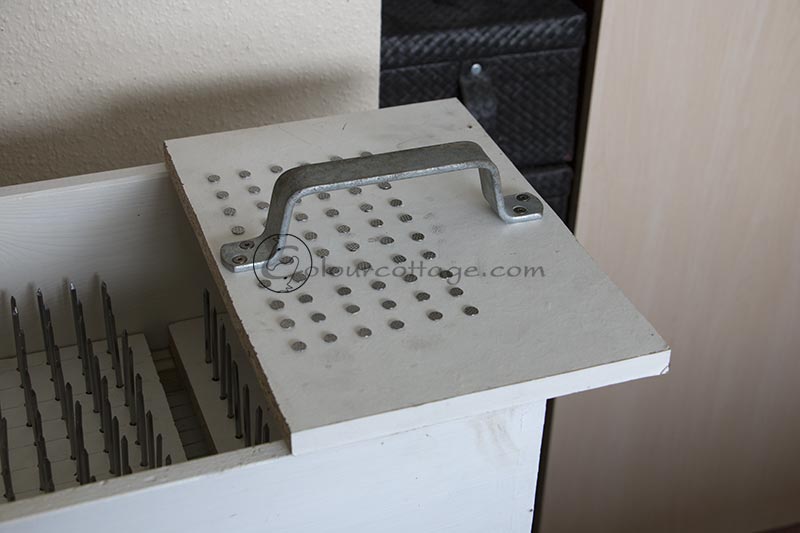 Wool goes in. This is about 3-4 x as much as you should put in there. So it went back out.

Done. This would normally take half an hour? Now: 3 minutes. 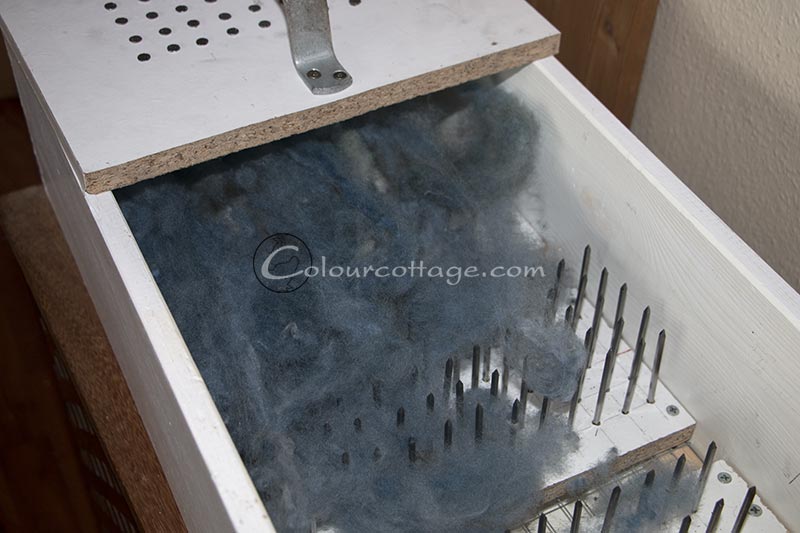 Crud at the bottom from just one handful of wool. 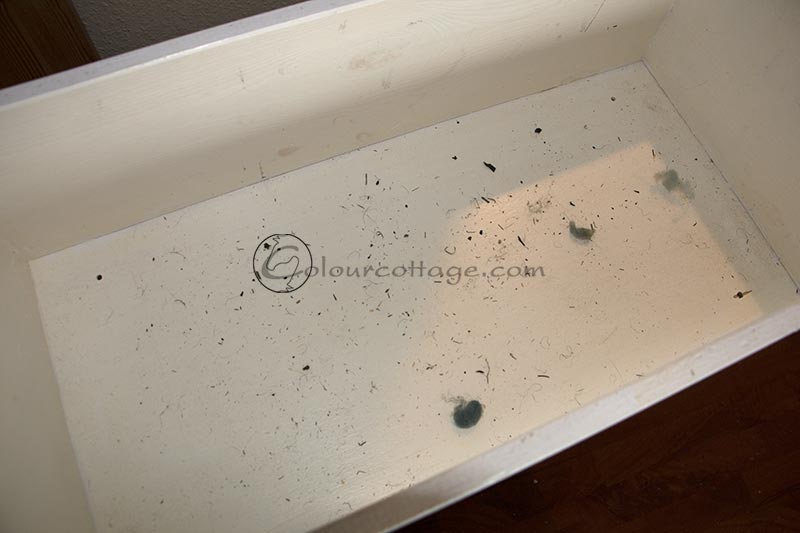 Fluff before and after. This batch is from my late woad dyeing session in 2013. The whole pile would take a week or more. Half an hour with the contraption. 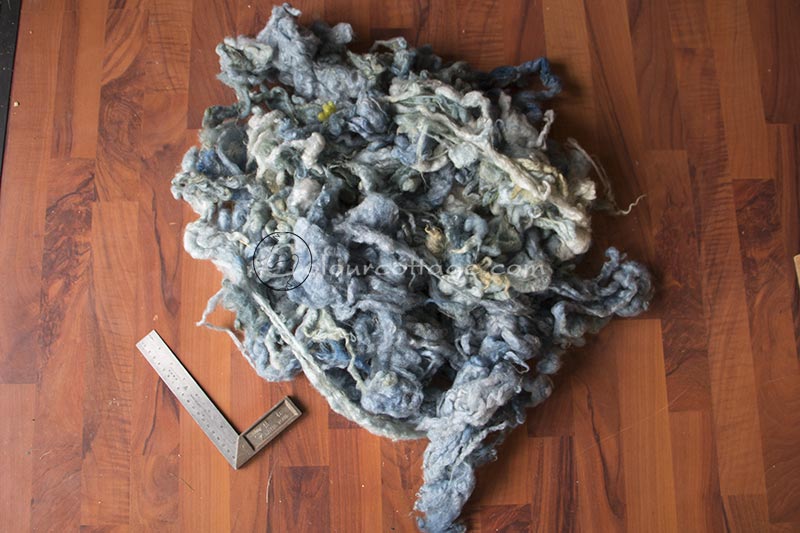 Result overall: The wool doesn’t get picked as well as by hand, lots of nepps in there still. But they can come out in carding or spinning, so I’ll take it in exchange for ease on my body. Mind you, these fleeces are not what you’d normally buy for spinning, they’re hobby sheep living in straw, shorn meat sheep style. 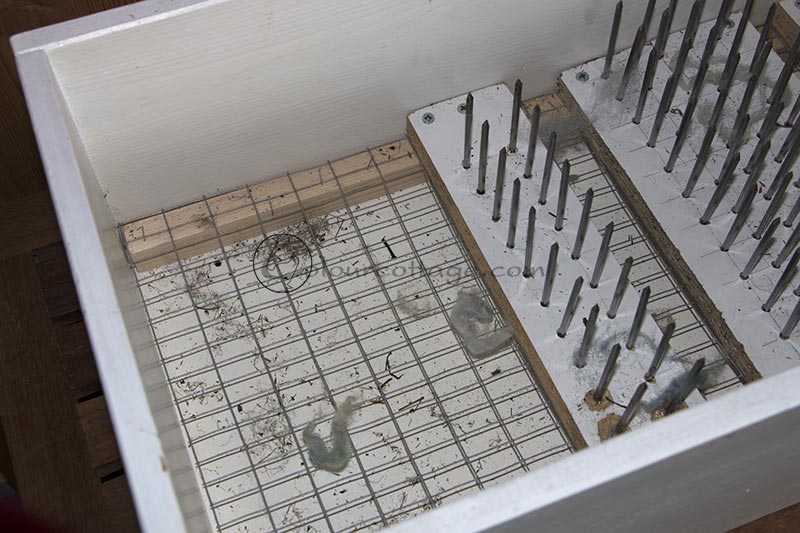 Don’t ask me how close the points should be together, I don’t know. I suspect they’re overlapping too much, so I’ll experiment with raising the lid some. In fact, if you want to try this, perhaps skimp a little less on materials. 😉 You can even buy building plans for one I think.

What I do know is that the less you put in, the better it works. One handful is enough: 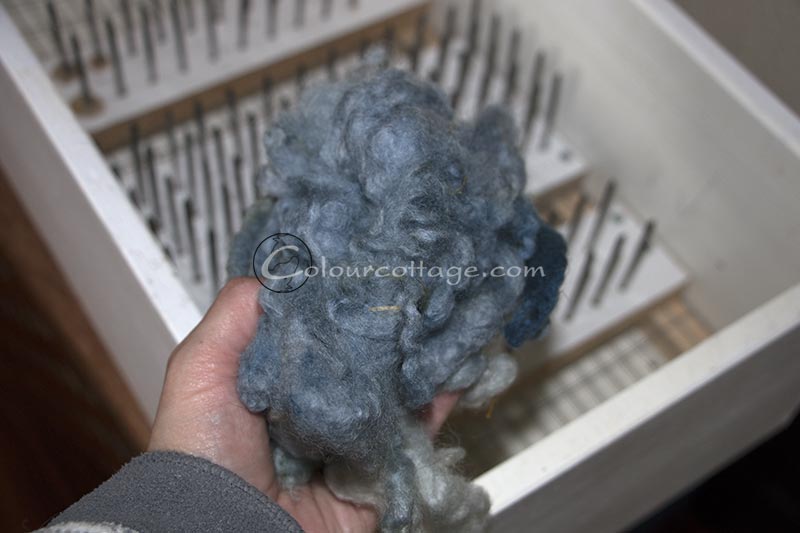 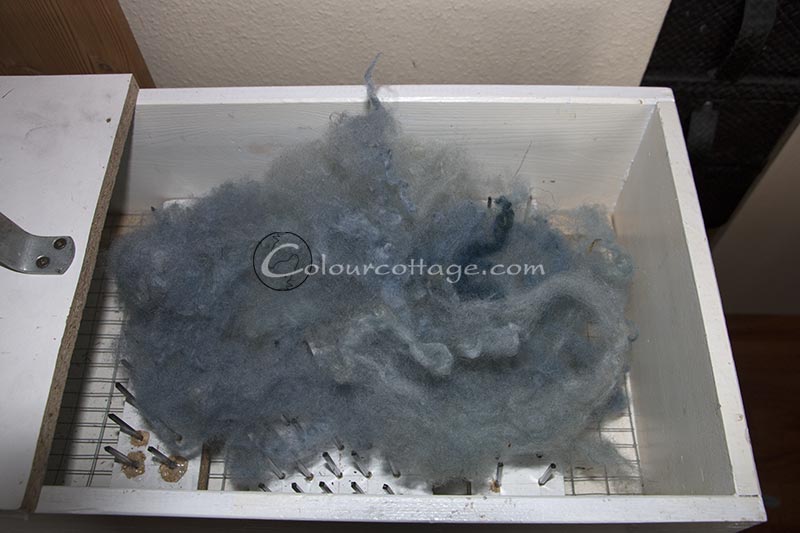 I’ll get back to you when I get the whole lot processed, to report how it went and how I feel about quality vs. time saved