Hey there. Once again my sincere apologies for lack of content – I do in fact have some linky things lined up, but thought it would be nicer to spread them out a little in between actual posts.

Thing is, I’ve been mostly focused on slinging paint, not yarn, recently, and thought I should make an effort to actually use my paint blog if that’s where I’m heading. Intentions are aplenty for my ditto photo blog, but as usual ideas are crowding me and the flesh is unwilling to comply. But I’ll keep pushing.

Fwiw I do have yarn posts almost right around the corner – just have to wash one more batch of woven fabric, spin some more yarn for my yoga mat. And and… You know what, I’m getting my scissors right now to separate two colours that should be washed separately, so there!

Here’s a video about an exhibition I went to see recently – knitwear designers playing around with renaissance clothing. Some is wearable – some is, well, pure fun. I still have an intention of making my own clothes from handwoven fabrics, I just may have to decide to not make my own patterns, because I never get to the stage where they are in fact ready to sew up. Much time and many spoons wasted, of which I think we’ve determined I don’t have a huge supply.

Then I suddenly decided I’d really like to get back to doing crossword puzzles. You know, make me sit down and rest my back, make me smarter at the same time. I did them as a child with my grandparents until they died in the 90’s, then I just stopped because I don’t buy magazines. So I got a couple this weekend with only puzzles in them and oh boy I was having so much fun getting back into it, remembering more and more words and tricks as I went along. Right up to the point where I realized my neck was so stiff I could barely turn, and today, wham, woke up with a headache. How come all those people on their phones 24/7 aren’t complaining of this!?

Now I worry it’ll carry over into knitting as well. Because I wasn’t exactly planning to be done with it, just focusing my efforts elsewhere at the moment to be more efficient and focused. But if it’s going to be a pain in the neck I’m not sure it’s worth it. Makes me wonder just how many of my interests I’ll end up having to abandon; I’m still not quite recovered from killing my ponies to tell you the truth. 🙁 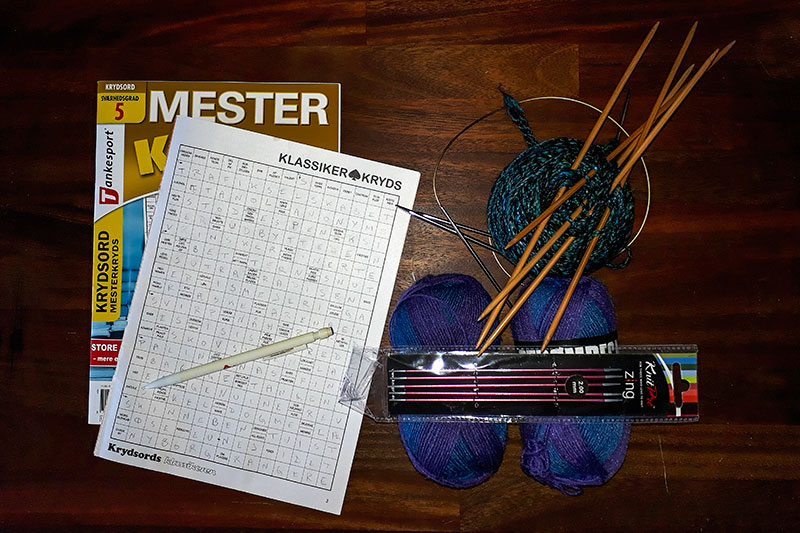 You readers out there with fibromyalgia and whatnot, is this a thing, and what do you do about it? I know you can get puzzles online (alas, not knitting, so much), but I really like doing it old school, curled up on the sofa with cats, blanket and a pencil in my hand rather than ergonomically correct in front of my big monitor. So I’m kinda hoping this is just a case of my chiropractor being right when he said I shouldn’t do brainy stuff after a neck adjustment, especially if I’ve also experienced nausea. So now I’m left to my own devices wondering if I’ve basically wasted a treatment! Seriously, I don’t think walking aimlessly around my stoodio counts as vigorous exercise…

Winter decided to arrive late and temps will be in the blue all week, and I’ve been having fun with my new weather app. You can decide which level of profanity you want to see, mine is of course completey unfiltered: