Every time I do a post about these, I also look for the original post, the very beginning of the project, and once again realize that it’s nonexistent. I got the first 3 fleeces before the blog began in 2012, so I never recorded the scouring etc. in here, the next two landed the year after, where I probably thought I’d already recorded it so thought nothing of it.

And then I’ve just been mentioning them in passing until I put on the lid on the dyed fiber, then took it back out briefly when I made the wool picker last summer – after which kittens happened = impossible to sort bundles of fleece into many piles of colour on the dining table. I neglected to show you the rolags I did finish, probably because I thought I’d be done in a minute, like. Yes indeed, there lies a draft from last year, saying almost the same as this one. Well, at least I know my own mind, even if I do take detours in it sometimes. And upload the same fleece photos twice. I wonder what I named them last time? Ach well, two drafts deleted, that means I only have 126 more to go through at some point.

But now it’s all been picked and carded, the 2370 g that are left of the originally 10 kg raw fleece (the suffolk is spun AND woven into various projects mostly, but I was quite shocked to see these numbers!) Every step of the process you lose weight; skirting the raw fleece, in washing it you lose a lot in dirt and lanolin, then you pick out felted bits and fluff, then some more goes in the carding. So you get about 30% as yarn from incredibly filthy and matted fleece, filled with straw and not shorn for spinning. The first skirting and wash accounted for about 50%.

I make only two passes on the coarse cloth, not picking out all the nepps either, they will become “tweed”. Then I roll up tight rolags from the whole batt, which I pull out lengthwise into a nice fluffy roving when it’s time to spin. saves storage space rather than delicate little birdsnests or folded batts.

They are short fibers, so it’s a woolen spin with lots of twist in the ply to hold together. As I recall, can’t say I’m certain about anything right now. 😉 The wool will tell me when the wheel starts turning. 84 rolags about an ounce each, 190g of yarn spun earlier, which I’ll try to match for the whole set. No point in trying for anything but rustic! 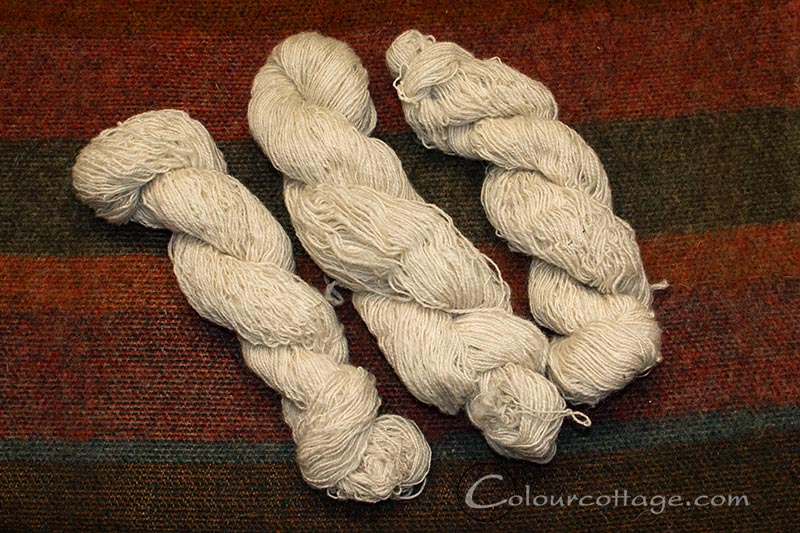 6 thoughts on “Getting there: Carding”