Can’t promise panels without beginning to think them up at least, so here comes first edition, feel free to join in with your own splendid ideas, please.

As mentioned I see two things happening in my knitting: simplifying shapes and designs even more, as in go back to drop shoulders rather than some form of set in type, and more of a one-size fits all instead of current measurements and a shaped waist, because let’s face it, it’s probably not coming back. Instead better drape and flow in the form of looser stitches. Handspun/handdyed yarns in garter or stockinette; for uniform yarns perhaps simple stitch combinations such as moss, brioche, and other repetitive variations on knit/purl to make it interesting.

This pattern does NOT drape, it’s thick and eats up yarn like a 5 yo gobbles candy

And this is where panels come in. To find the desired amount of drape, samples must be knit. Make them bigger means perhaps you don’t have to unravel them, why not keep and stitch them up? Felt and see how that feels? This idea works up to the point of A: using strips of varying drape together and B. all that stitching which I clearly don’t adore… Yes, you can see I write my blog posts as a way of thinking out loud, not as the end product of thorough study. Time saved not unravelling + time spent sewing = not worth it?

Next question: Would anybody wear a garment like that or are all the strips destined for blankets and tote bags (not so good with loose knits)? Let’s find out! I write down stitch combinations in a grid that is visual in nature, imagine seeing the front of the fabric and the P’s as purl bumps, not instructions (because if you knit every second row from the back and read it literally, you’ll get them backwards) This is as far as I go with pattern making other than scribbled numbers on the margins of anything. Works a charm when you pick up your UFO two years later. (not)

More elaborate methods of making interesting fabric (to make up for the simple shape of garments) could be: http://www.sequenceknitting.com/. I get enough counting therapy (works like a kind of meditation if you disciplin yourself a bit) when I weave, so knitting is typically for being around other people now that my sciatica doesn’t need as much sitting as last year. No lace patterns for me, or anything that requires keeping track, so I don’t know when I’ll look deeply into this method, but I’d love to see the results from those of you who have. Such interesting textures to be found there.

So for now the plan is making A: random pattern patches in random yarns to be used wherever, (small handspun samples get a chance to shine) B: planned pattern strips or patches with a specific garment in mind to be constructed around them. This would work really well when you don’t have enough of one yarn to make a complete garment but are really fed up with various colour striping sequences as I have been for a while. Agan, handspun; spinning sweater quantities of one yarn is not happening any time soon. 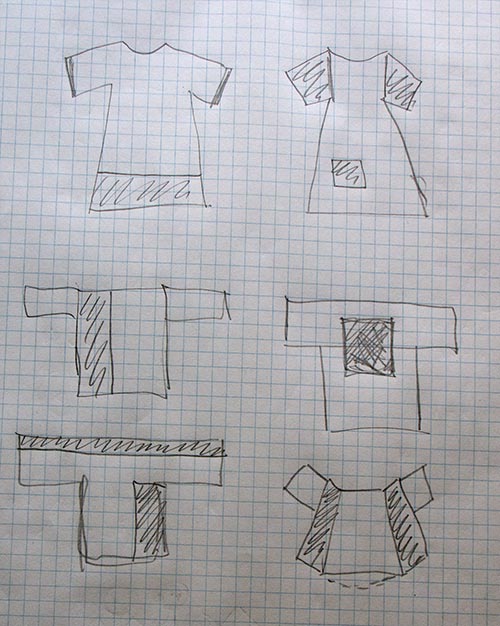 Most likely is that panel designs will incorporate more weaving than knitting however, on further analysis of the situation – so many weave patterns to try. More on that later – much later in fact, as I’m in the middle of an endless piece of yardage in 30/2 cotton. (for the uninitiated that means many, many, many passes of the shuttle to weave just 10 cm) But then I did say in the first post that I’d spend all of the coming winter pursuing this topic, so don’t panic. Woven samples, reconstructed t-shirts, mending, embellishing, revisiting the topic of combining it all. Come and watch me fumble. 😉

So many beautiful designs out there, so many clever people having done all this much much better before me, why reinvent hot water you ask? Because process. I can’t explain it, I love eye candy but I fall asleep following instructions.

Back in the late 80’s I designed some sweaters. With texture – and panels! So it seems I’ve circled right back. I sometimes wonder where I’d been if I’d just kept on track rather than spend 30 years on other weird life stuff which has also led nowhere in particular.  😉

Easy access to the whole Panels debate, once it happens. I think we’ll be looking at some of those t-shirts next, but I have several posts in mind for those since I can’t do it all in one batch.