The lack of interest last year allowed me to slack off on the subject, and the nettles I gathered are in fact still on the rafters in bundles. I partially blame blogging as a difficult forum for debates and sharing, as well as my lack of expertise obviously. 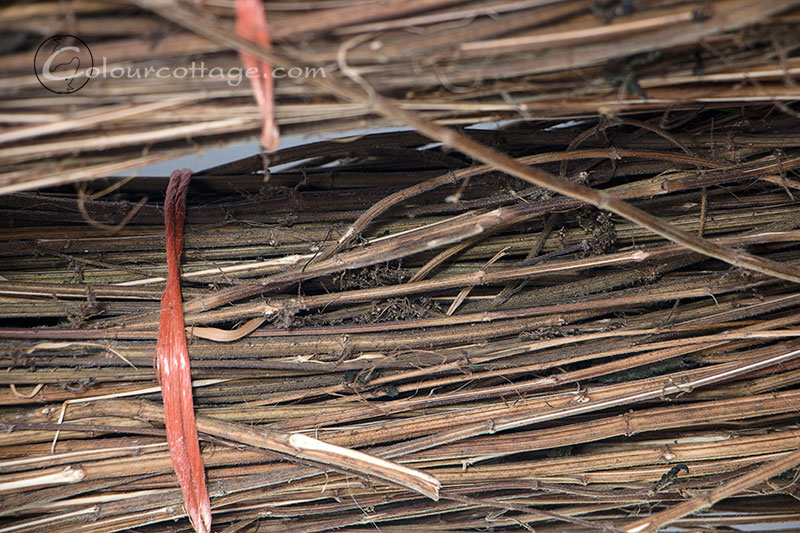 As luck would have it, I’m now off the hook – Motherowl invited me to a Facebook group a little while ago, created by Allan Brown who has considerably more experience in the matter as well as a lovely video describing his process. In a very short time thousands of people have enrolled from all over the world, quite a few Danes too! So the interest is clearly there and I look forward to learning more. (even though I detest FB)

A lot of videos have been posted online since I last did a search on the topic, I began adding them to the Nettle Page, but soon realized that the numbers are overwhelming, so I recommend following my samples over to Youtube and then see what pops up in the side column. There are quite a few in Russian, but you can still see clearly what they’re doing even if you don’t understand a word. 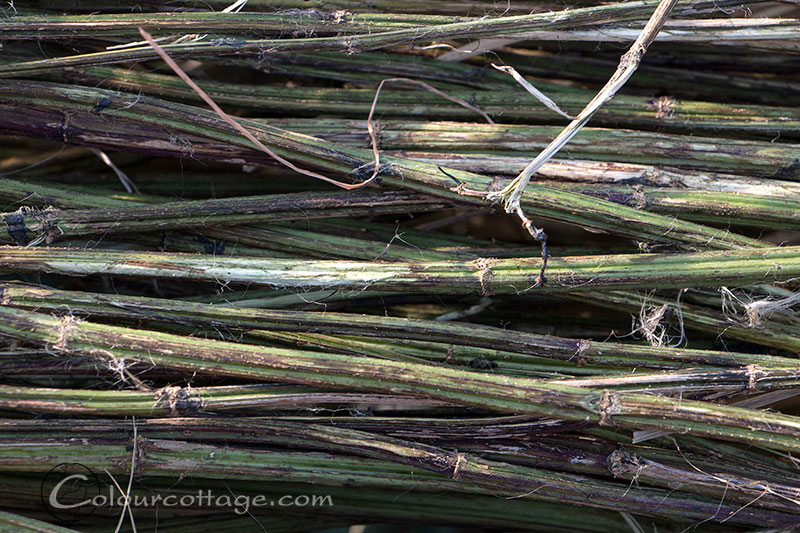 Anyway, I did some small experimenting recently, first I tried retting a fresh cut bundle in a tub of water to avoid having my stalks eaten by Spanish slugs, but while the water was quite foul smelling the stalks didn’t appear to be “done”. So they went on the grass anyway for dew retting – and subsequently turned bald after just a day, while still being green and waxy in patches. They’ve been waiting for me to try stripping, all dried up. 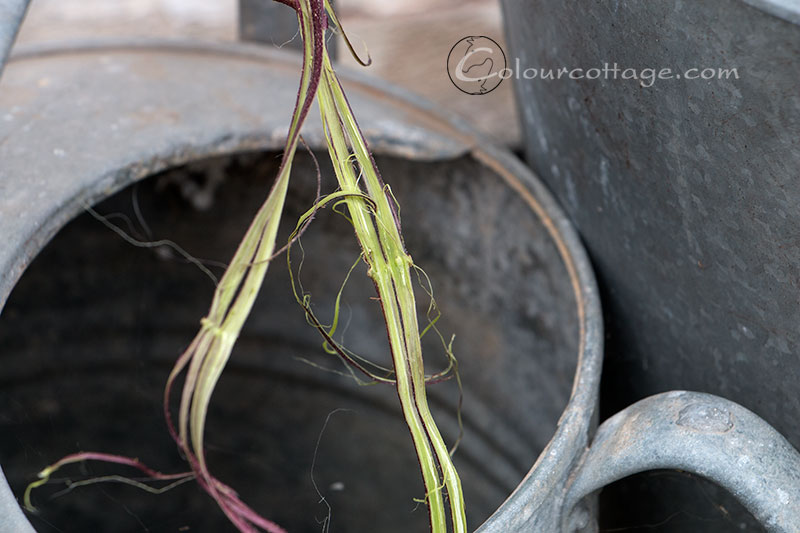 Next I wanted to try stripping the fiber off fresh nettles, but my remaining stalks were not very tall, wood like and with “knobbly knees” due to many side branches, so it was difficult to strip them. I managed to get a small bundle just for testing, which I then decided to boil with pot ash to see if I could get the pectin out. “Did I say pot ash? Oh, but right here on the shelf is some soda, alkaline is alkaline, right?” I then proceeded to load it so thoroughly I ended up with green mush, broken fibers. And an incredibly stinky studio, whoa. “Nice hot day, go wear a dress and read a bit in the garden”-time! 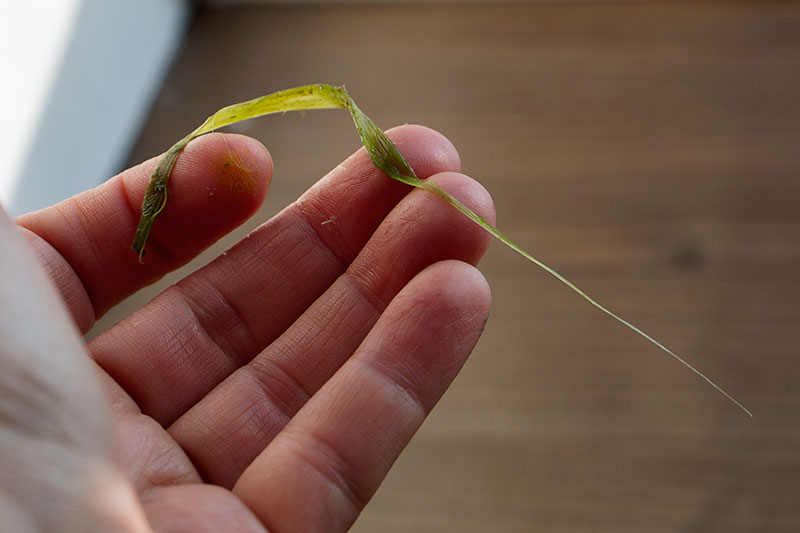 I seem to remember having read that nettles from shaded places are best, and since mine grow in the open along fields, that could make the difference on older plants. (my theory being, the shaded ones reach up for light and grow longer rather than bushy) So I’ve decided to gather a batch from the forest as well, if I ever make it out there between other back breaking chores (in other words, I keep postponing it every time we get to a dry day). If they turn out better, that’s what I’ll do but I’ll start sooner next year for finer fibers possibly. As well as a chance of a larger crop, bundle by bundle.

Today I found a patch on the other side of the property which were straight, branchless and in pretty good condition, so they were my next bundle. Plan was to collect, strip and dry, then decide later what to do with it. You can make cordage without retting, but really, my interest in twine is limited. I want to weave. 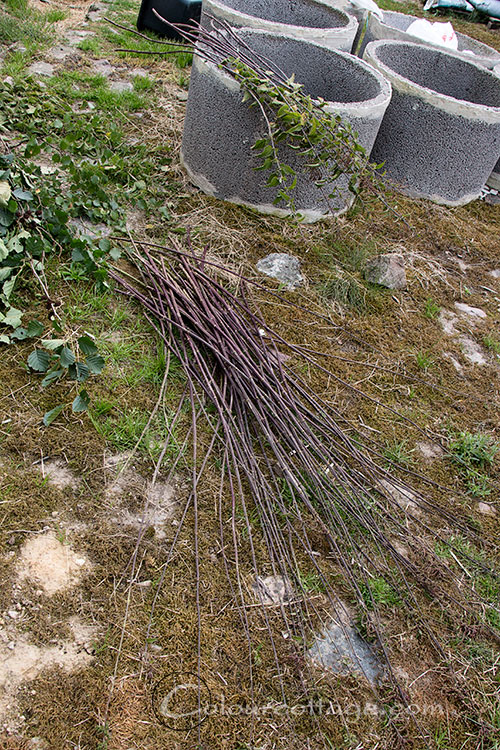 However, after just one stalk my hands were tingling, not painful and it went away quickly, but it was annoying. And you kinda have to keep at it before they dry out and I could see myself getting very bored and frustrated with the other things I wouldn’t get done. 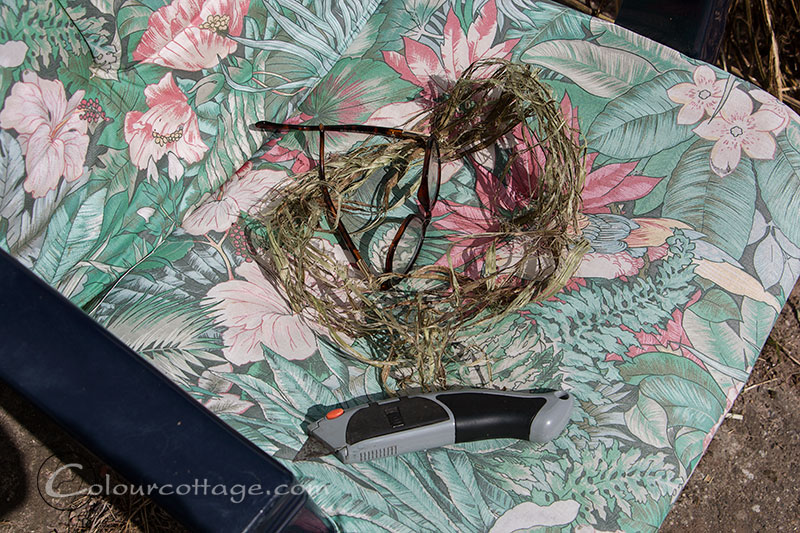 Stripping the dried, retted stems is hard on my old lady hands too in terms of strength, but I can do it one stem at a time if I so please! So the new bundle is in the tub too – this time however I won’t put water in it, I’ll just leave them to the elements. After all, if I can get totally mouldy tansy hanging to dry inside from the stable ceiling, a few weeks outside this late in the year ought to get some microbes brewing or whatever it is that will break down nettles?

I seem to get an equal amount of fibers either way – one stalk each, fresh on the left: 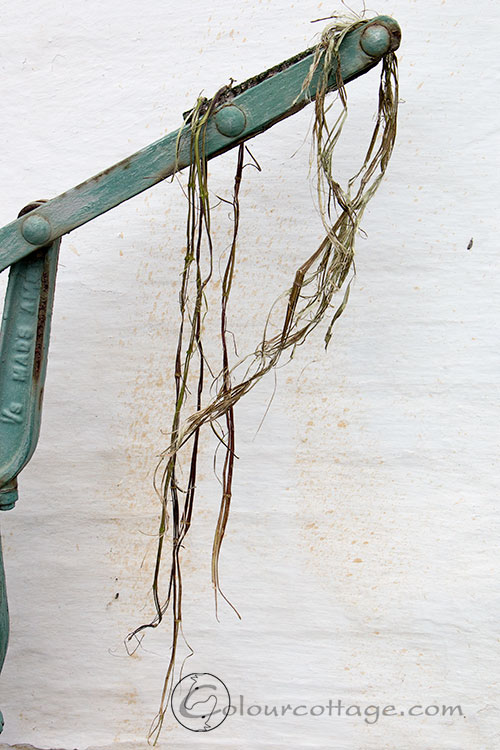 In my next installment I’ll have a look at those stalks from last year. Meat hammer at the ready or maybe I’ll soak them, I dunno. Nettle spinning is one of those things I’d like to install in my toolbox even though I may not be doing it all the time. And it could be I completely misunderstood the information about storing the nettles for a season first, or the jounalist doing the interview for Väv did. We’ll see.

8 thoughts on “My failed nettle-along”