Sometimes I worry I’ll end up like one of those ladies in 19th century romantic novels who just sit by the window doing needlework all day and faint whenever they get flustered. 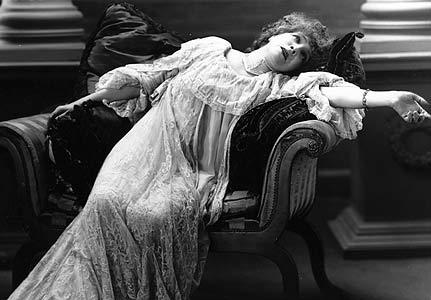 How do you imagine you’d cope with a life where you contribute nothing, do nothing, just potter about? I know it’s the reality for some who are seriously ill (see comments) or permanently injured, dependent on money and assistance from others, but otherwise it’s not exactly the norm in our society as it was a few hundred years ago, where it was a matter of pride that your wife did not have to earn a living or even do the laundry!

Is it really possible for culture to change our personalities that radically, or is one or the other perspective more true and natural than the other? In such case, which one – is every step forward in time progress? Women now have the right to go and fulfill themselves independently, which is good. In fact they rather have to – is that good too, in all cases? Because it seems that flock instincts dictate that we all subscribe to the same, latest, modern opinions, those who differ are just weird (such as the Amish).

I believe people should arrange their lives whichever way they like, if they can, and sod the norms. But when it comes to myself I’m much less accepting. Because I too subscribe to the latest norms apparently, even though I have no problem ignoring fashion, popular tv etc. or express a different opinion in a group of strangers. I have no need of a job to define my identity, in fact I would have no qualms at all being a skinny white rich bitch (a label once put on one of my friends who was anything but, but that’s another story). It’s the pottering about and dependency I don’t care so much for. 😉

I was hoping you might like to have a bit of a discussion, while I go search for an old bottle of strong cough meds that I think is hiding somewhere in the cupboard.