It began with a series of sketches or “free form painting” while listening to the album “Voyager” when I thought to title the paintings after the songs. First one to be completed was “She Walks Through the Fair”, (pictured left), then I got occupied with other matters, but this summer they have surfaced again. There is no attempt at guessing what the composer meant by the titles, it’s more of an exercise in how a painting develops if it’s been named before completion (and sometimes they swap along the way).

Initially I was going to call the collection “Primaries” for using mostly just bright tones from magenta, yellow and blue, which is why two of the paintings don’t have song titles – maybe they will be expanded into a series of their own some day depicting cityscapes. She Walks Through the Fair WIP The Song of the Sun WIP 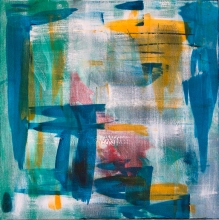 Light on the Docs