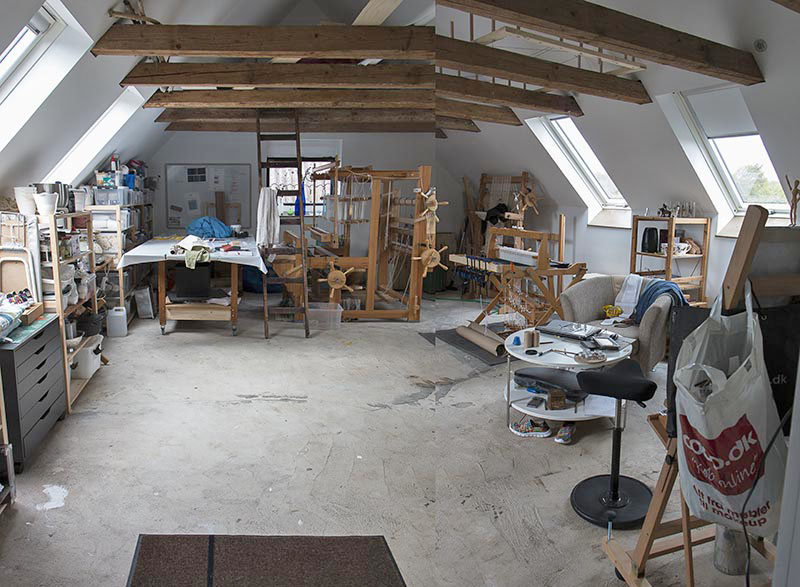 I realized that while I’ve shown glimpses from my room after finishing, I never officially wrote the last post of our building project. I’m still waiting for one set of shelves for books and weaving gear, but that requires a remodelling of G’s office, so I’ll count that as improvement rather than part of the “done”.

The room is absolutely lovely. I love it up here, it’s so quiet and peaceful and I always feel happy. Exactly what I dreamed of. I can’t fit my office/library because I wanted that big work table on wheels, but that’s really the only flaw. We couldn’t have made the room longer because the roof has an access hatch in the middle of the building, and while it could do with a total rebuild that was a bit outside our scope. (truthfully I only thought of that particular option of moving the hatch, just now as I’m writing this…)

It’ll never be a pretty, Pinterest worthy, fairy tale space; it’s sparse and filled not with decorations but supplies. This is one of a handful of especially feminine genes where I’ve come up short, and that’s that. But it works. 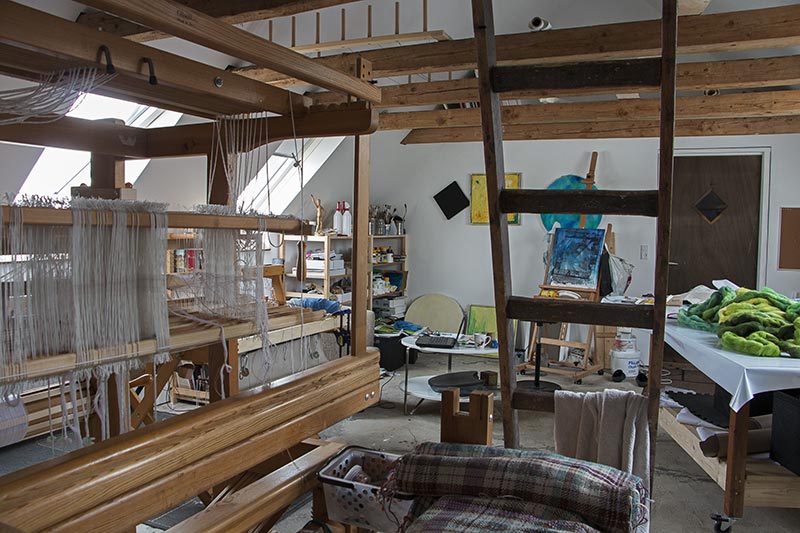 The insulation is working, while the house is stuffy on hot days and the hay loft just on the other side of the door feels like a sauna, this room remains fairly cool – and all I need is to open the windows and close the blinds halfway should I need to lower the temp a bit.

No lamps yet, but since we have “light nights” for the next three months it’s quite hard to determine where exactly I’d want them. So we’ll do them when fall gets closer. I have one daylight tube and I want to find similar white lights for the rest of the room, I can’t abide yellow bulbs for working with colour.

I still have one installment of this series to finish: I’m going to do something fun with the door. But since I’m not done yet, you’ll have to keep waiting on the edge of your seats for that part.

Funnily enough I’m just now going through a spell of non-creativity, lack of focus, semi-despair, sluggish muscles. Could be that I’ve divided myself between just a few too many subjects and now not knowing what to do about any of them. Could be my natural fluctuations which still come as a surprise to me every single time. The heat? The glass of wine I had this weekend? No point trying to guess. I suppose we’ll find out soon enough if it’s a permanent condition, or just the threat of losing it all in a few months.