Having promised that I’d do something with my weld and some failed, beige fabrics from last year’s plant printing tests, I wrapped half a sheet around plants, water and more plants on top and the other half sheet loosely crumbled on top, floating. As well as one of the failed cotton skeins that I’ve been going on about forever but never shown yet. (I have just two more than I want to put into some dyebath again, for, like, the 5th time, THEN!)

Simmer in the canner at 75° C for a few hours and left to steep overnight.

So now I have fabric not just blotched with beige, it’s got yellow blotchiness as well. Actually, the more the better in this case, we wants interesting fabrics. What I’ll do to it next remains to be seen, this feels like a very slapdashery kind of dye summer. Probably I’ll split them again and do different things to each piece. They always look more promising when they’re wet, only to fade into nothing. At any rate it looks like I’m perhaps not quite done with cloth after all before I give up completely. Cotton yarn however… But that is another story for later in the week. As for eco printing I haven’t had much luck there either. 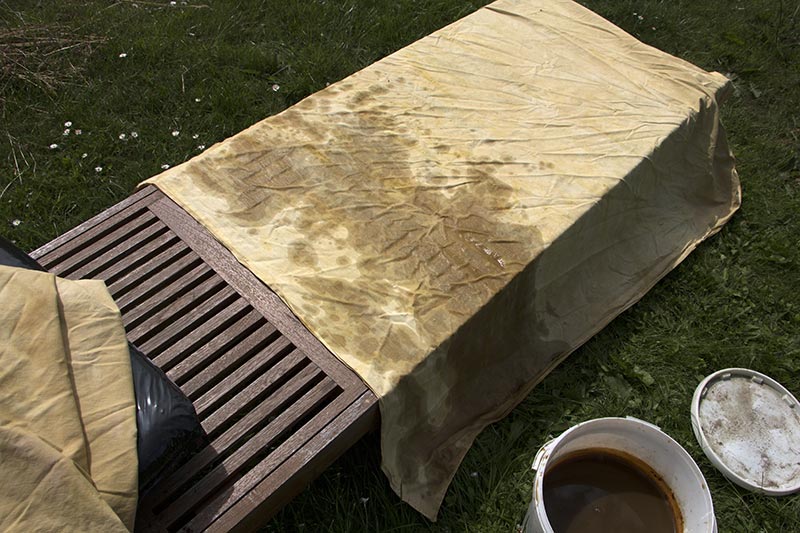 I didn’t really expect to get any contact prints (weld is a slimy soggy plant when cooked), but hey, how’s this for a lark? To my surprise there are in fact faint plantlike shapes on the fabric, in both green and yellow. I’m going to drip some iron over some of them to see what happens…. (nothing, as it were)

To be continued – at some point. Dye sessions are over for a little while! My strawberry plants always explode with berries this time of year, very short season, fabulous taste. I’ve tried others to get a longer season, but they just can’t match. So I try to come up with all sorts of things made from strawberry, short of picking and eating directly, such as salads, ice cream, cordial, jam – problem is, I don’t really feel I have the time to also find varied and interesting recipes, so it turns into a bit of a chore unless I just do the usual. And of course I’m not organized enough to actually make a plan before the season begins, because then I’m always doing other things… Otoh I don’t want to stop growing them. I did downsize a bit after several summers of picking 3 kilos a day!